Britpop Man looking for the light

Having exhausted his copy of ‘The Rutles Greatest Hits’ Neu Labour (s)hit-maker’s new offering ‘The Ballad of the Mighty I’ sounds like a Tears for Fears cast-off spliced with Mann and Weil’s ‘On Broadway’. Before you get all excited it’s nowhere near as good as that sounds. It sounds more like … well, I think we all know don’t we?

In the promo-short-vid-image-seller-crock our erstwhile zero affects disdain (‘He’s sooo good at that!’) with a Clem Fandango clone (off ‘Toast of London’, comedy fans) as he gets in the ‘Mod zone’ in regulation coat. He’s Jimmy. He’s Weller. He’s, he’s … wearing plum trousers. In what looks like East of the capital. A girl sprints past only to stop at the bank of the canal to shiver and wait. Why? What does it all mean? She can’t be that destitute, she’s wearing those deliberately ripped at the knee jeans.

Without stopping to enquire, he tosses her his parka, a true gent. He shuffles on. Crossing under a bridge a button on his shirt appears to have come undone. Is this a hidden meaning? He spots some shoes round telegraph wires? Wait, isn’t that code for narcotics in the hood? Undeterred, he continues. Gripping stuff.

Passing a second-hand clothes rail he swipes a denim jacket, is this a sign that his purpose is nearing its resolution, his costume is almost complete? Somebody call plod, billions have just witnessed thievery.

However, two web start-up gonks scarper past causing our protagonist to look intrigued. Curious, he goes after them. Turning the corner he sees a prostate body on the pavement with what looks like a guitar case. Our man thinks ‘Nice one, if I can master a chord I can churn out some proper ropey stuff and who knows, P.T. Barnum could be right’. The other tech-twit sees him and does runner. Without calling any of the emergency services our axe-man takes the guitar case and walks back to where he came from. Larceny by finding. (Theft Act 1968)

But, wait, Tech Boy’s now behind him so he dives through a door that’s (get this) the same colour as his strides.

Halfway through it’s a shit ‘Memento’.

Inside it’s fellas in shit jumpers and beards (natch), bikes on windowsills, a Nespresso machine and probably a ball pond for those tranquil times. A laptop is playing the previous (what feels like light years) acts of this saga, our denimed-dandy attempts to make sense of it all as he sees his memory replayed back. He daydreams: ‘I really liked that coat as well. I’ve ended up here without uttering a single word to anyone. Oh, I geddit, it’s one of them ‘it was all a dream’ thingyamebobs.’. I really fancy a Chicken Cottage for tea. Before or after me champagne bath? Oh lummee, dilemmas. dilemmas.’ 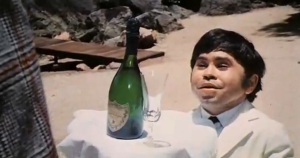 ‘Aaaah, a nice soak in me bubbles’

Snapping to, he leaves. No one cares. Down a dark corridor, through another door (or is it a portal?) he takes the guitar out, straps it on as if it’s his and strides confidently to a stage. The thick plottens …

He joins the band in song at the SAME time as we’re hearing it … 3.33 minutes. Cracked it, it’s a Masonic message saying, ‘ha ha, you pillocks, buy this dross’. *goes straight to iTunes to purchase aforementioned masterpiece*

*snaps out of state of dizziness* 4.24, he’s had enough. Exit stage sans guitar. Back through the door. An end (or point must surely be looming).

Looking pensive yet unaffected by the minutes/hours that have elapsed he ambles into sunlight, it’s gonna be alright. Oh, there’s those shoes again. Are they what Alfred Hitchcock would call a ‘McGuffin’? Our warrior is non-plussed and ambles onwards.

He’s suddenly back where it all began and here come the comedy bits again. The anticipation …

Fake Clem Fandango calls him ‘Liam’ and asks for another take. His parka’s reappeared and a lackey dresses him as he states ‘No chance’. He walks away. Knowing references to Coldplay and the consumption of latte are deployed to the amusement of no one. My sides are un-split.

Taking rhyming triplets to ‘cat-sat-mat’ levels, this is the usual witless boundary respecting tripe and destined to have his hordes frothing at its ‘ingenuity’ and ‘ground-breaking instrumentation.’ Incidentally, it’s indistinguishable from those other Manc maestros Take That’s new excretion ‘Let in the sun’. Somebody’s been swapping lyric books.

The very best I can say is that it’s all meaningless. High Flying Bird? Let’s agree on battery-farmed turkey, yeah?

File under ‘A New Yawn’