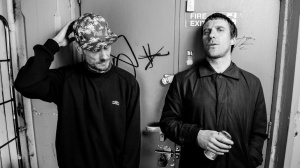 This sold out gig would appear to be the antithesis of everything this duo stand for. Hipsters with sleeve tattoos, wispy beards destined to be on the cutting room floor by Christmas, imbibers of nothing but craft ale.

However, the spirit of Sleaford Mods highlights the insidious nature of ‘class’ distinctions and lazy stereotypes, quite simply there are those that have and there are more that don’t; social strata are aspirational prisons.

This is the sound of dreams crushed dating back to 1979 and the evaporation of any dreams of progress since. Unless you adhere to the individualistic, moneyed edict of the nightmarish American Dream, the ‘fuck all others’ mentality, then this is your call to arms.

Profane yet urbane orator Jason Williamson just has to get these exasperated expletives out or he will explode. Dissatisfaction with the electoral shitstem, a state of address spat out at breakneck ferocity. Addressing themes such as a necessary societal conscious awakening, crap food, jumped up middle managers, ineffective line managers, the ubiquity of joblessness, the banality of office work (‘… workstations, forced to engage in flirtatious conversation’ in ‘Fizzy’), acts that attempt to position themselves in the established lineage by adopting certain clothes, hair dos, referencing and name dropping those from the instantaneous ADHD cultural splat; cool today gone tomorrow.

Williamson’s scabrous, controlled rage is littered with the blowing of raspberries at the state of things, he has vocalised the disenfranchised, pointing out false idols and how their days of plenty are numbered. The veil has slipped, social media has shown the Emperors and Empresses to be naked and always have been, they wear the attire of the elite, the arist-rock-racy in their gilded palaces hanging out with Grimmy and his Chiltern Firehouse posse trading in obsequious back-slapping and ‘top bantz’.

Grimmy and acolyte keep it real

This is music with context and content, articulating and rhapsodising NOW. This is not music by rote or committee. This is Spartan anti-rock mythology music that couldn’t be less enthralled by the past as evinced by ‘Pubic Hair Limited’. Built around the obligatory doom-laden deep bass line it decries the perpetual residue of the past, trading on memories (theirs and ours) in an oath of fealty:

This is a performance sans performance, devoid of the tropes of showmanship, stripped of artifice, the ever laconic Andrew Fearn rocks gently from side to side at the controls of his history box, pint in hand. All music history appears to be contained in there, every bass line, every riff, a guitar lick here and a synth stab there (‘Tiswas’ with its Kraftwerkian flourish in particular).

These pair have been round the block and are the antidote to the mantra that music’s for the young or the very old, the PR driven colonisation of new consumers or consumers of a ‘new’ where everything is ‘great’ or ‘seminal’. Two 40+ males articulating universal themes of suffrage and dissatisfaction and collective memories of Doug McClure films, Spit the Dog and Kevin Bacon’s footwork (‘Tied up in Nottz’).

With a huge following in post-industrial parts of Europe, the feelings of disillusionment resonate. We all receive the same message: be aware and combat all attempts at divide and rule; social cohesion and unity is the solution as far-fetched and unobtainable as it appears.

Bar a solitary ‘thanks’ there is no interaction between act and audience; this is ego-free, encore-free and above all exhilarating. Talk of the town and raging against the machine, these current press darlings are too long in the tooth and savvy to fall victim to the charmless seduction of the trend chasers, the fad men, the Iphonies.

With talk of them going ‘full-time’ it will be interesting to see if the anger dissipates and the targets alter. There’s more chance those in the firing line will increase.